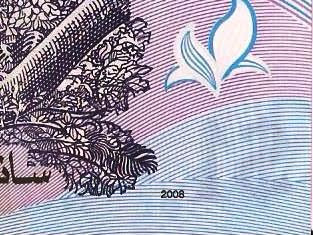 I came across the 2008 $1 note during Hari Raya Aidil Fitri (the Muslim festival to mark the end of the fasting month). During this month, many families give out money to the children who come visiting their houses. What I did not realise was that the 2008 is new as the ones before this was the 1996 and the 2007 series. It took an email from my friend Kai before I realised that I got the 2008 series. 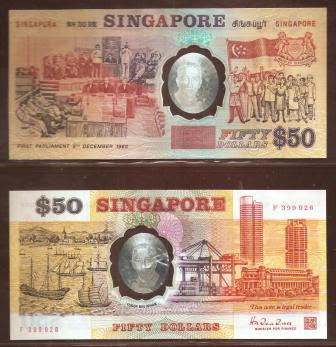 I bumped into one of my junior colleagues at MOF yesterday. I was there defending my ministry's budget request for the next financial year. He told me that he had something that I might be interested in. He showed me a $1,000 worth of $50 Singapore notes.

I already had a few of these notes. I was quite surprised that he had 20 pieces of them. My colleague travelled frequently but even then I was surprised that he had managed to collect about 20 pieces of these notes. They are not rare but certainly you don't find them laying about. He asked me how much they are worth. Used notes are difficult to judge so I can't answer him. He said that someone offered to buy each note for $55. I thought that was a bit cheap but they are used. Anyway to cut a long story short I got a few of those notes. Who knows when I will see 20 of them again in the future.

These Singapore notes I think were the first time that Singapore forayed into the polymer notes. It was certainly an experiment back in 1990 for them. The notes were issued to commemorate Singapore's 25th Anniversary of their independence.
Posted by Rozan Yunos at 6:27 AM 4 comments: