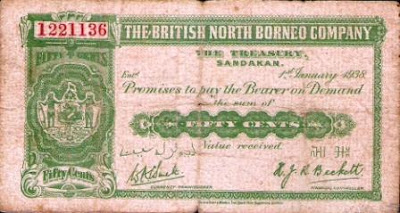 This 60 year old note is the Sabah's 50 cents paper note issued in 1938, just prior to the second World War. This paper note is interesting as most fractional (less than $1) notes were issued during the war itself. The Straits Settlement fractional notes were issued in 1940 and in 1941 (used in 1946). But the Sabah one is issued a couple of years earlier in 1938. Metal must have been in shorter supply even before 1938 or the metal cost is so high that the North Borneo government felt that it was worthwhile to go to paper instead of minting metal coins. I got this from a German dealer for about US$200, a bit on the high side but I could not find this anymore.
Posted by Rozan Yunos at 7:11 AM