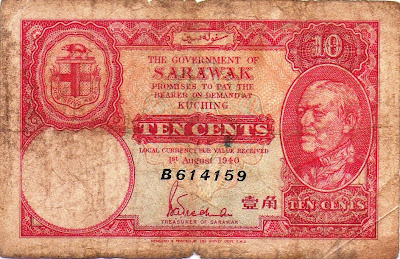 This is one of the last two notes which I bought recently. This one is a Sarawak 10 cents note which was issued in 1940. The condition is not so good and I got a good bargain for it - I guess nobody else wanted it - not in that condition anyway. This particular note is an emergency issuance during the Second World War. Remember, practically most British related currencies were printed in England. During the War, metal was scarce and paper notes were issued instead of metal coins.

This is the only Sarawak paper coin that was issued during the War. There were other paper coins but most were issued very much earlier on.
Posted by Rozan Yunos at 7:48 AM

I have the same note that I inherited in a collection of other notes. Mine is in not so great condition too. Do they have any value when sold?

I have the same note that I inherited in a collection of other notes. Mine is in not so great condition too. Do they have any value when sold?