1906 was the beginning of Brunei's modern administration brought about the first British Resident, Mr. MSH McArthur. With the modern administration, many old institutions were broken up. One national institution was the administration of land ownership. Up to 1906, land belonged under one of the three types of administration, the kuripan, kerajaan and tulin. You either had to be one of the descendants of these holders or you are not. Or if you are rich enough, you can own the beneficial rights by paying the holders lots of money. Anyway, come the modern government in 1906. The first thing they did was to establish state lands which could be leased out or given out to companies who can make economic use out of it so that the country can benefit. The 1909 Land Code did that.

Last year was the 100th anniversary of the modern land administration. The Land Department did a 100 year celebration by holding a national land seminar but unfortunately the stamps to commemorate it were not ready.

Last week, the Land Department celebrated its existence as an independent department since 1960. In 1906 to 1960, land was administered under each district office. It was not until 1960 that the first Land Commissioner was appointed and a separate land department was created. So to commemmorate Land Department's 50th anniversary, the stamps for 100 years modern land administration were finally released:

The stamps came in three values 10c, 20c and $1. The 10c and 20c depicted, employees at the Land Department doing internal and external work and the one on the $1 stamp was a lucky recipient receiving land title given out under the Skim Penggeranan Tanah TOL.

There is also a first day cover: 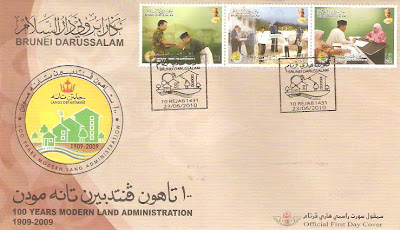 For those interested in the technical details of the stamps:

Money is one of the least vital angles of human life. Stop making money!

Money is one of the most vital factors of your life. Keep on asking money related questions!