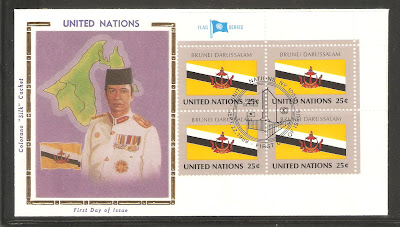 On 22nd September 1989, the United Nations issued this first day cover. I am not sure whether the UN only issued one first day cover for Brunei only on this day or whether the UN issued many other first day cover on the same day - all based on the nations' flags. This flag design is surprisingly the only flag design that any stamp, Brunei or otherwise has depicted. Not a single stamp issued by Brunei has the country's flag as its theme. That must be an oversight of sorts.

The first day cover also depicted the shape of the country and a picture of a person. Those actually are on a piece of silk attached to the front of the cover. The map of Brunei is clearly wrong - there is a land attachment between the four districts. Whoever it was that was assigned to do the map could not have believed that there is such a country completely cut off from its fourth part. So he decided to do a land attachment which was so nice of him and I am wondering since this is on an official United Nations first day cover, whether this could be used as a basis for you know what.

I think the future for brunei is strong as long as they maintain in economic growth. I have invested in a company in Malaysia called tradenextglobal which is doing very well looking into invest in brunei

The same day is not the problem, the issue is the nations flags