In 1996 when His Majesty celebrated his 50th birthday, our Postal Services issued Brunei's highest face value stamps ever. Five stamps in a miniature sheet each with a face value of $50 per stamp was issued. The miniature sheet was sold at $250 in a framed cover. This remained the most expensive face value item that the Postal Services had issued in its entire history (though in 2006, the postal services issued a $60 stamp to commemorate His Majesty's 60th birthday).

That miniature sheet now has a catalogue value of some $1,000 and almost impossible to find. I managed to find one - the last one in this particular philatelic agency I went to - and luckily not at the full catalogue value. According to the agency that sold it to me, it bought 10 in 1996 and only managed to sell all 10 in the period of about 12 years. This sheet must not be that popular because of the expensive cost.

Anyway, I have the feeling that not many have seen it and since it is quite attractive and not to mention an unusual piece of Brunei's history both philatelically and otherwise, I thought I will post it up here so that everyone can look at it.
Posted by Rozan Yunos at 6:20 AM 6 comments: 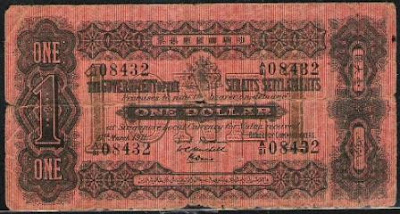 One of them is the Straits Dollar $1 note of 1911. This is part of the 1906 to 1924 series which the Straits Settlement Government in Singapore issued. I have one which is of 1916 variety which I have posted here in the past.
Posted by Rozan Yunos at 9:17 PM No comments: 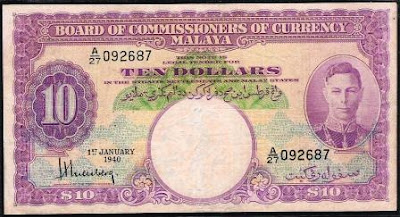 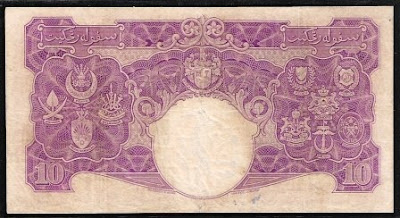 For Brunei, this note is the first ever paper currency note to carry the Brunei crest (see lower quarter right). The subsequent notes have been with the national crest.
Posted by Rozan Yunos at 3:28 PM No comments:

I haven't been updating the numismatic side of this blog. Actually I have bought a few currency notes but I have been a tad too busy to scan them to put up on the blog.

One of the last few which arrived is my purchases of old Saudi riyals. I managed to get this particular 1968 50 riyal note. It's 40 years old and about the same age as Brunei's first Sultan Omar Ali note of 1967. This riyal note series is the last before the portraits of the Kings of Saudi Arabia appears on it, the first of which is 1976. Early Saudi notes are interesting as they carry no King's portraits on them.
Posted by Rozan Yunos at 7:59 PM No comments: 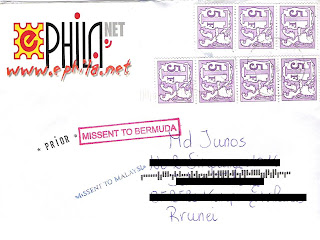 I collect stamps, first day covers and normally get them from overseas, so I received a fair number of letters as well. Once in a while I wondered whether all my letters are on time as I know I have quite a few which have not arrived yet.

This one took a few months to arrive and when it did. Look. It went on a tour round the world from Belgium to Bermuda and then to Malaysia.
Posted by Rozan Yunos at 1:10 PM 3 comments: 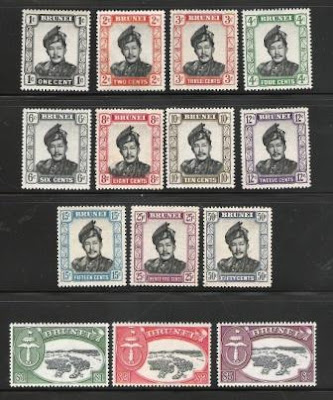 In 1952, Sultan Omar Ali Saifuddien who had taken over the throne on the death of his elder brother, issued the first definitive stamp with his portrait. The previous Sultan, Sultan Ahmad Tajuddin did not issue any definitive stamp but did issue a special commemoration in 1949 to celebrate his 25th Silver Jubilee on the throne.

The Sultan Omar Ali series were issued from 1952 to 1971. Three definite series can be determined. The first series was issued in March 1952 on papers with watermark multiple script CA and a perforation of 13.

Despite Sultan Omar Ali abdication of the throne in 1967, the third series of definitive stamp using his portrait continue with the third series issued from 1969 to 1971. This time the paper was changed to glazed paper but the watermark was unchanged still using Block CA and the perforation remaining 13.
Posted by Rozan Yunos at 6:30 AM 3 comments: 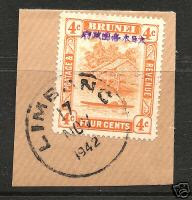 By the time you read this, this item will be in someone's hands. I have bid for it on ebay but the price has gone beyond my financial limit. It was US$227, way above the US$150 max I put on it. Why is this valuable?

Firstly, this is a Brunei stamp overprinted during the Japanese occupation of the country. That makes a used stamp expensive. Think of how many Bruneians sending letters in those days. Secondly, this was postmarked Limbang. Limbang, as you know, is currently a part of Malaysia and had been a part of Sarawak ever since it was forcefully taken away from Brunei in 1890. For a Brunei stamp to be postmarked in Limbang is almost impossible except during the Japanese occupation when they treated all the British Borneo territories as one prefecture. And that's why the 4 cent stamp could exceed US$300 by the time you read this.
Posted by Rozan Yunos at 7:02 AM No comments: 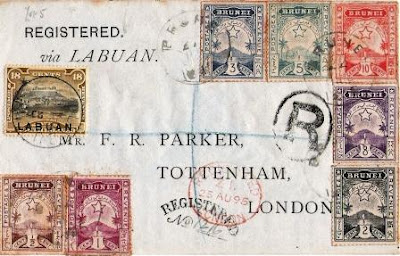 Since Brunei at that time did not belong to UPU, the FDC sent to London had to be overprinted with the Labuan stamp as well. That's why the FDC also bore one Labuan stamp. Not all the Brunei stamps are on this FDC, the last 3 high values, 25c, 50c and $1 are not affixed.
Posted by Rozan Yunos at 5:40 AM No comments: 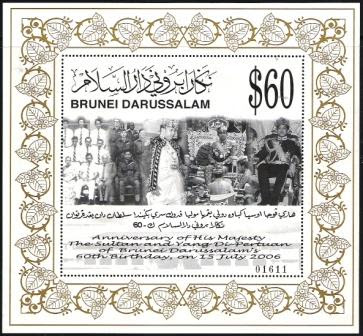 I thought I missed out on this issue and when I saw it at the Philatelic Booth at the current book expo at ICC, I grabbed this. This is the second of very high value miniature sheet produced by the Brunei Postal Services. The first was a $50 issue issued during His Majesty's 50th birthday.

This $60 miniature sheet is produced for His Majesty's 60th birthday. I am not sure how many are produced but not many people would want to buy it. The Postal Services actually sell this with a golden coloured wooden frame and they are not selling it at $60. The selling price is $260 and for that price only an enthusiast would want to buy it. Anyway, I am sharing this one with all of you out there.
Posted by Rozan Yunos at 7:40 PM 7 comments: