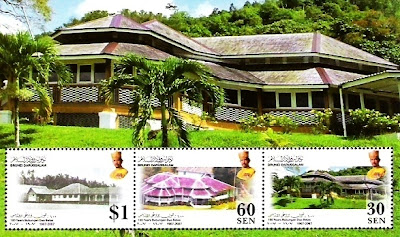 A couple of days ago, the Post Office issued the latest stamps and first day cover. This time to commemorate the 100 years of Bubungan Duabelas. Bubungan Duabelas is the oldest building in Brunei today and used to be official residence of the British Resident (based in Brunei beginning 1906) and in the mid 1950s, the official residence of the British High Commissioner. The British surrendered the house to Brunei Government sometime in the 1980s and today it is maintained by the Ministry of Culture, Youth and Sports to become an exhibition hall.

The interesting thing about the stamps is that the old house on the $1 stamp is not that of Bubungan Duabelas. I am not sure whether it is deliberate of the Post Office or pure ignorance on their part. The house on the $1 stamp is that of the British Counsul General's and was actually built in the late 1890s at the foot of the hill and is actually on water. It was in 1907 that the Bubungan Duabelas was built further up the hill. The site for the Bubungan Duabelas used to site another old house built by the British Counsul General as far back as the 1850s.
Posted by Rozan Yunos at 10:02 PM

Hello
First of all, let me send my best regards to you and your family.
Your lecture is very interesting.I am Chau Do Truong Son , a Vietnamese collector , I'm interested in Vietnam on the world's stamps.
I've known you by chance through internet and I know that you collect Burma stamp.
In the next August(08/08/07), there will be a joint-issue of ten ASEAN countries and I wonder that you can help me to send a real FDC of this Brunei stamp ?I will do the same for you .
This is my address :
Chau Do Truong Son , 367/14 Nguyen Trong Tuyen street , Tanbinh district , HCM city,Vietnam.
Hope receiving your reply soon !
Sincerely yours.
Thank you.
Truong Son

Nice to meet you too. Why not? We can exchange FDCs. Can you give me your email address so that I can email you my address.