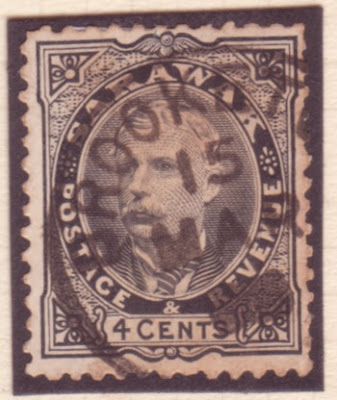 Brunei only have its first stamps in 1895 when a Robertson persuaded the Sultan that he is able to run a postal system for Brunei. He makes money for the stamps sold outside Brunei but the government keeps the money for stamp sales in Brunei. Unfortunately his postal system has been described as sporadic and by 1902/03, was basically no longer functioning.

Brunei's first official postal system was in 1906 when the British Resident came into Brunei for the first time.

What happened to people who wanted to send letters before 1895 and in between 1895 and 1906 when the postal system was sporadic? They have a choice of asking nicely whoever is going to Labuan or they go to Brooketon (now Muara) and used Sarawak stamps. Brooketon until 1921 was run by the Brooke family because they bought the coalmine concession. Brooketon was run as a state within a state - it was run as part of Sarawak and Sarawak stamps were used extensively.

Above is one Sarawak stamp handstamped with Brooketon postmarked - proof that Brooketon for a few years was treated as a 'colony' of Sarawak.
Posted by Rozan Yunos at 6:47 PM