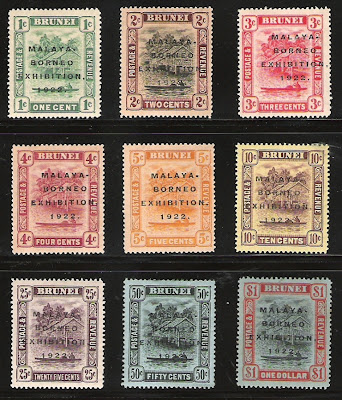 In 1922, a trade exposition known as the "Malaya-Borneo Exhibition" was staged between the 31st March and 17th April 1922 on a newly reclaimed land at Telok Ayer. The exhibition was organised by the Chinese Chamber of Commerce with the participation of the Governments of the Straits Settlements, Kedah, Kelantan, Trengganu, North Borneo and Brunei. It was opened by HRH The Prince of Wales. The participating countries and territories issued their own stamps with overprints of Malaya-Borneo Exhibition. However both Brunei and North Borneo also added the year 1922 thus the overprints of these two sets read "Malaya Borneo Exhibition 1922".

The above is the Brunei 1922 stamps. These stamps were taken from the existing 1908/1916 stamp stock. I have had all the set up to 50cents but I could not get the final $1 stamp. I knew someone who had a whole set but would not sell me just the one stamp. So I had to buy the entire set from him for $220 which is not a bad price really considering the CV Of the market.

By the way, Telok Ayer is in Singapore. It was the site of the original Chinatown in Singapore.
Posted by Rozan Yunos at 6:26 AM