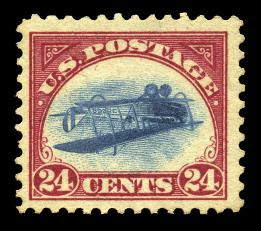 DALLAS — One of the most famously flawed stamps in U.S. history sold for $825,000 to a New York man who bought it slightly cheaper than the record price another "Inverted Jenny" copy fetched at auction last month.

The rare 24-cent stamp, depicting an upside-down Curtis JN-4 biplane known as "Jenny," was sold privately this week to a Wall Street executive who did not want to be identified.

But Heritage Auction Galleries president Greg Rohan, who brokered the sale, said the buyer is the same collector who lost an auction last month in which another "Inverted Jenny" sold for $977,500. The winning bidder was New York real estate magnate Charles Hack, Rohan said.

Rohan said his client, whom he described as not being a rare stamp collector, was glad to get another chance at the prized misprint.

"I suspect he's going to enjoy owning it and showing it to a few close friends," Rohan said.

The mint condition red, white and blue stamp is one of the finest known surviving stamps from the original sheet of 100 misprints. The original 100 were bought at a Washington, D.C., post office in 1918.

The Dallas auction house calls it one of the world's most famous rare stamps.

Randy Shoemaker, founder of Professional Stamp Experts, said there are probably fewer than 1,000 collectors in the world with the money and obsession to seriously pursue such a rare item.

"This is the Rolls Royce," Shoemaker said. "It's the most expensive airmail stamp in the world."

Rohan said Heritage acquired its stamp from Sonny Hagendorf, a dealer from Scarsdale, N.Y. Rohan said the copy sold by Heritage is one of fewer than five to have never been hinged, meaning affixed with adhesive to be placed in a stamp album.

[Note: there are other more expensive stamps out there but this one is meant for airmail and can claim to be to the world's most expensive airmail stamp.]
Posted by Rozan Yunos at 12:05 AM