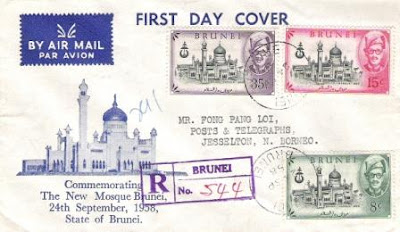 Anyway, I have managed to acquire very recently a first day cover issue on that day. It was sent by a Mr YF Chin of the Telecommuncations Department in Brunei to a Mr Fong Pang Loi, presumably his friend at Posts and Telegraph of North Borneo in Jesselton (today's Kota Kinabalu). The first day cover will soon be 50 years old too.
Posted by Rozan Yunos at 5:57 PM