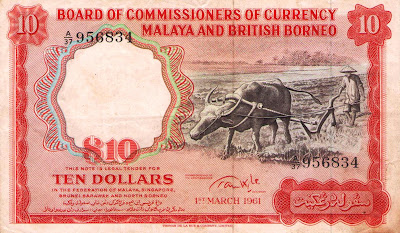 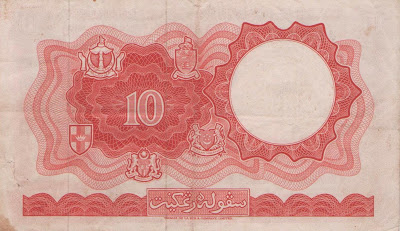 I received this note today together with a number of other notes that I bought. This is my fifth or sixth note and I still enjoy buying them. There is nothing really striking about this note except that it is the first ten dollar note which did not have either the King or Queen of England. Instead it had a buffalo and hence it is better known as the duit kerabau. Kerabau meaning buffalo.

In the reverse, Brunei's crest is shown. The crest is obviously a complete one as by 1959 Brunei already had its written constitution already mandated by then and so was the crest. The note was signed by Tun Tan Siew Sen. The interesting about this note was sometime in November 1967, the note lost value. Originally it was convertible to the new currency notes issued by all the three countries Malaysia, Singapore and Brunei. But this note was linked to the British pound and in November 1967, the British pound was devalued. The value of this note was by then around $8.75 or thereabouts. Nobody wanted to keep it. Everybody ran to the bank to exchange it.

Now the note is worth around $300 and above. So much for an unwanted note.
Posted by Rozan Yunos at 6:22 PM