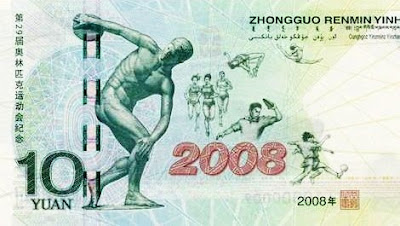 I got a lot of currency notes from China but the one that I wanted was a modern one - the 10 yuan Olympics souvenir. I could not get that note. I found out that only 6,000,000 was printed and you would have thought that would be plenty. Apparently not. Distributed nationwide, each city only get a few thousand pieces. In Nanjing, only 3,000 pieces were released there. So there is no way I could get it unless I want to pay big money for it. It cost at least US$300 each.

The AP said when it first released the news, only the Olympics could bump Mao Zedong, the founding leader of communist China, off a Chinese banknote. To commemorate the Beijing Olympics, China's central bank is issuing a new 10-yuan note, according to a report by Monday's official Xinhua News Agency. The note is worth $1.45, the starting price for a taxi ride in the capital. Mao is gone from the note, replaced by a sketch of the new National Stadium — the Bird's Nest — and the emblem of the Beijing Games, according to the report. Both are set against the backdrop of the Temple of Heaven, one of Beijing's iconic sites. The back of the note features a statue of a Greek discus-thrower and the year 2008 written in Arabic script. The bank said it will issue 6 million notes beginning Tuesday, a tiny distribution meant almost as a souvenir. The new note is slightly larger than the ordinary 10-yuan note, which will continue to circulate.

I did manage the get the next best which are the Hong Kong $20 and Macao 20 Patacas issued by the Bank of China. 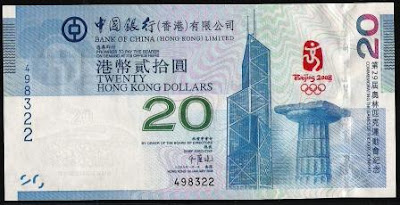 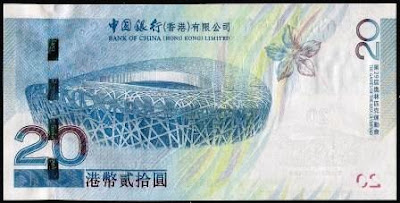 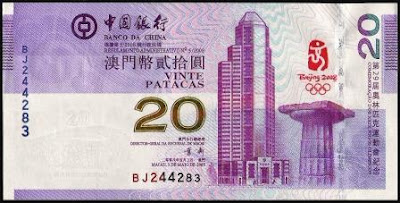 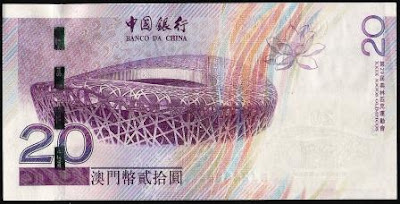