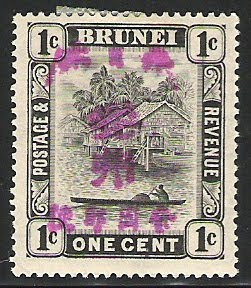 If someone was to ask me what is it that you want? There are many things that many of us want and I too have my own wants. But I am pretty much satisfied with the Al-Mighty's gifts.

However philatelically, there is something I want the most. That one is this Brunei's stamp during the Japanese Occupation in the second World War. During the War, the Japanese overprinted Brunei's stamps with their Imperial Japanese mark and used these stamps. These stamps are all highly valued because not many were available due to the fact that not many people were sending out letters during the War - the Allied (British, Australians etc) were captured and who on earth were the then Brunei people want to write to?

The most expensive of all the overprinted Brunei is this one. This 1 cent stamp overprinted for $3 payment for telegraphic use is valued at about $12,0000 to $15,000 today! Get hold of one and you can live quite happily to the end of days. However, I acquired this stamp recently. And most of you readers are thinking WoW!

Unfortunately this is not the real McCoy. This is a fake and I paid pittance for it. Relatively speaking pittance but even fakes still cost a fair bit. If ever you find an original one hidden somewhere in your grandfatherh's stamp collection that looks almost like this or better than this and want to know who will pay good money for it, let me know. I can't offer $12,000 but let me know, we can work out a new price.
Posted by Rozan Yunos at 12:07 PM

By chance I stubbled upon your blog and read many items with great interest. Particularly the Japanese overprint stamp. I lived in Brunei from 1953 to 1962, age six to sixteen. My father was an engineer there for the government.
It so happens, that since that time I have kept with me one only stamp with a Japanese overprint. Regrettably it is not the 1 cent edition, rather it is the 8 cent of the same stamp. The over print is different and the stamp has been franked. I have no idea if it has any worth, and that is not the point. If it is of any interest, please contact me. Chris Wilkinson

I have an orignal unused in perfect condition

Money is one of the most serious features of life. Keep on asking money related questions

Money is one of the least vital angles of your life. Stop asking money related questions