When I was in Vientiane, Lao's capital city, I had a chance to acquire an old 100 Kip note. I had not been following up on Lao's monetary notes before so when I bought it I did not how old it was. I did know that Lao was formerly part of the French Indo-China colony and this note was similar to most of the European colonial currency issued then.

I found out now that this 100 Kip note was actually issued in 1957. Prior to that, Lao was using a currency note which served all the three French colonies of Vietnam, Cambodia and Lao. In 1957, the Lao government issued notes denominated solely in kip. The notes were for 1, 5, 10, 20 and 50 kip printed by the Security Banknote Company, 100 kip printed by the Banque de France and a commemorative 500 kip printed by Thomas De la Rue. 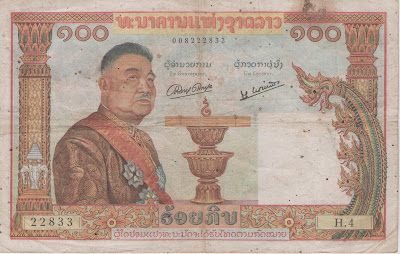 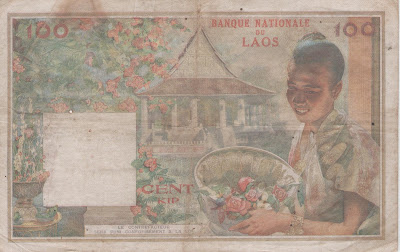