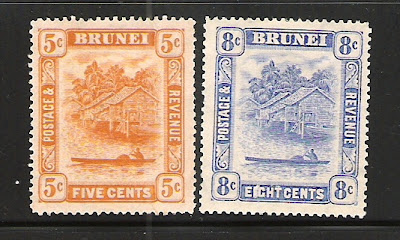 It's amazing what insomniacs can do. I used my 'unable to sleep' time to check and recheck my stamps collection. Armed with a magnifying glass and a $60 watermark reader, I checked almost all my Brunei collection. The early Brunei collections are crazy as there are so many colour changes and the only way to tell them apart is to check the watermark. Some watermarks are visible but some are next to useless. But if it was not for the watermarks, then it is very hard to tell when one stamp was produced when compared to another.

What I managed to discover what that hidden among the spares are two stamps specifically issued in 1916 which was to complement the 1908 series. The 1916 had 2 colour changes, the first was the change of the 5cents from black and orange to full orange and the second was the change of the 5cents from blue or inidgo blue to ultramarine. However they kept the watermark the same which is Multiple Crown CA. Subsequent 5cents in 1924 and 1947 kept the same colour but the paper watermark is Multiple Script CA. Similarly for the 8cents stamp.

Most catalogs would place these two stamps as part of the 1908 collection, so the 1908 with all the various colour options would be around 16 stamps in total.
Posted by Rozan Yunos at 12:26 PM