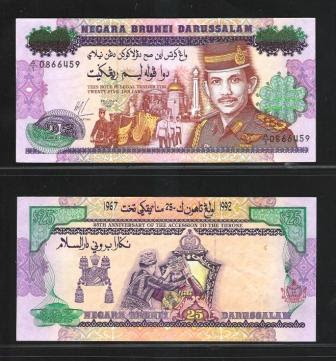 Every now and then, I come across this $25 paper money. Recently my sister managed to get a few pieces for me. I had a few but my stocks dwindled down when I left MOF one and a half year ago.

This $25 note is worth around US$30 for uncirculated notes.
Posted by Rozan Yunos at 6:58 AM

I have a pair of this note in my collection. Bought them some years ago. What I am interested to know is that was this note popular (in circulation) among the people in Brunei? Like some of those notes in Malaysia (RM20) and Singapore ($20, $500), we all know that these denominations were not that popular and as such both respective Central banks creased to issue them (except Singapore $20, 2007 note). Any idea what was the quantity printed?

Quit making money. Money is one of the least material characteristics of your life!

Stop asking this form of questions... Money is not salient

Money is one of the most important points of human life... Don't stop making money!