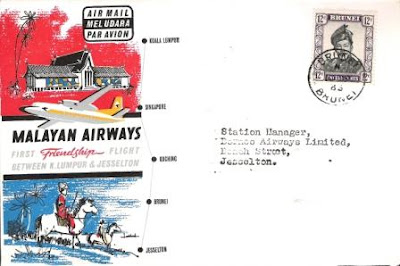 SELAMAT HARI RAYA AIDIL FITRI to all Muslim visitors. I wanted to show something Hari Rayaish either money or stamps but unfortunately there is none to be found. Anyway, I will talk about my latest acquisition which arrived just before the Hari Raya holidays.

I acquired this first day cover the other day which was to commemorate the first flight of the German made airplane, Foker Friendship, flying from Jesselton (now Kota Kinabalu) to Kuala Lumpur on 10th September 1963. On the cover it stated that it flew from Jesselton to Kuala Lumpur via Brunei, Kuching and Singapore. At the moment I am unable to ascertain whether it actually passed those 3 cities but I would presumed that would be correct as Foker Friendship was only a turboprop (it used propellers or kipas as Bruneians would call it).

Malayan Airways also acquired BOAC (British Overseas Airways Corporation) and QANTAS as part new owners expanded their services to make it an international airline by 1957. Malayan Airways quickly expanded and flew to other countries around the region including to Brunei, Thailand, Jakarta and Hong KOng. In 1963, Malayan Airways became Malaysian Airways and by 1966, both Singapore and Malaysian Governments jointly owned the company making it Malaysia-Singapore Airlines (MSA). By 1970, MSA offered services to London. In December 1972, MSA split to become Malaysian Airline System (MAS) and Singapore Airlines (SIA). The last name change was in October 1987, when it became Malaysia Airlines.
Posted by Rozan Yunos at 7:05 AM

how much did you acquire this for?

Interesting as I have the same FDC but with a 20C North Borneo Stamp. The letter is addressed to The Manager, Malayan Airways, KL