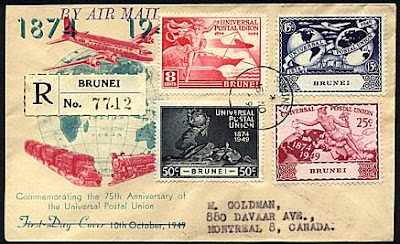 In 1949, Brunei released the first ever stamps which are totally different from those it has released before. Prior to this, Brunei has only worked on three designs - the 1895 'star' stamps (not an official release according to some), the 1906 Brunei overprints on Labuan stamps and the 1907 Kampong Ayer stamps which came out in multicolour from 1907 to 1947 plus a small change in design. It's amazig that for around 50 years, the Brunei postal authorities worked on these few designs only.

So in 1949, Brunei released a set of stamps to commemorate the 75th anniversary of UPU which has sophisticated and interesting designs. Has the authorities suddenly turned into design freaks? Unfortunately or fortunately no. The Brunei UPUS stamps are part of an "Omnibus Issue" by 78 of the member nations of the British Commonwealth, most (65) of whom chose to issue the same set of four designs, differing only in colors, the name of the issuing country and the values. If you have bean around the stamp world, you will notice these.

When writing this, I am in Australia and do not have access to my catalogue and I was not sure that Brunei had a first day cover for this. I was quite surprised to find the above photo for a Brunei FDC. But this FDC has the the text designating this as a First Day Cover has been lined out, since the cover was postmarked on November 15, not October 10. Yet it contains the entire set of stamps, and is on the specially cacheted cover, and was part of a set of 1949 UPU FDCs. Perhaps there is a story here - are true FDC's of this issue from Brunei scarce or non-existent?

I will do a PS when I get back from Australia.
Posted by Rozan Yunos at 6:33 AM