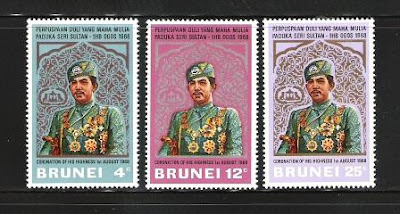 Yesterday was His Majesty Sultan and Yang Di-Pertuan of Brunei's 40th Anniversary of his ascension to the throne. 40 years ago, Sultan Omar Ali Saifuddien decided to abdicate the throne and put his son up. It was a deft political move by him. The Sultan's Coronation did not take place until the following year.

I went through my album hoping I could find a stamp which commemorates his acension to the throne and found none. The Postal Authorities were caught by surprise as did everyone else that no stamps were issued to commemorate the event. And by the time they wanted to do one, they might as well prepare for the coronation stamp and that is all that I have philatelic wise. In fact His Majesty's definitive stamps did not come out until 1974 and Sultan Omar Ali's definitive first issued in 1952 was reissued in 1969 and 1972 with different watermark. Similarly for currency notes, it was Sultan Omar Ali's notes until 1972 when His Majesty Sultan Hassanal Bolkiah appeared on the note.
Posted by Rozan Yunos at 4:37 AM