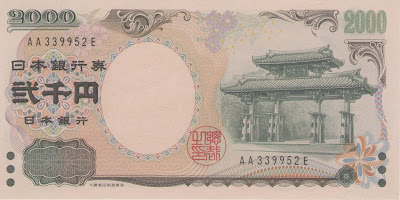 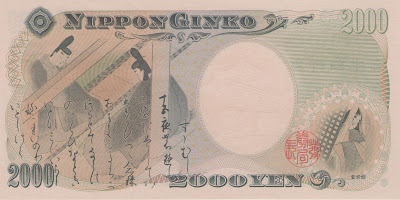 I bought this a few years ago from a dealer in Singapore. I can't remember what possessed me to buy it but I am glad I did. I didn't realise the uniqueness until after I came back to Brunei. This is the only 2000 Yen note that the Japanese Monetary authority has ever produced.

The 2000 yen note (二千円紙幣 Nisen-en shihei) was issued July 19, 2000, to commemorate the 26th G8 Summit and the millennium. Known as the D Series, it was the only 2,000 yen note design ever to be printed. The design was similar of that of the other Japanese notes in circulation at the time of issue.

The obverse has a serial number and shows Shureimon, a 16th-century gate at Shuri Castle in Naha in Okinawa Prefecture. The back shows a scene from a famous Japanese literary work called The Tale of Genji and a portrait of Murasaki Shikibu, the writer of the classic literature.