Parents sometimes are the oddest of creatures. I didn't know my parents had a stash of currency notes until I started telling them about my currency notes collection recently. So last Friday when I dropped in, my mother gave me a whole bundle of notes from many places - some from places where my father used to be posted as an ambassador including Maldives. Not many people have been to Maldives or collected Maldives currencies.

My mother also gave me a gem of a coin going back all the way to 1897. This is the coin used in the Straits Settlement (Malaya and Singapore but also Brunei) - a one cent with Queen Victoria on the obverse. Below is the scan of that coin. She gave me a number of other British coins but I thought I will tell you about those in other postings. Is that 1897 coin, the oldest in my coin collection? No, I have an 1886 Brunei coin, a 1794 Dutch East Indies coin and another unidentifiable year Brunei coin which is around the 17th and 18th century too. Anyway, those are for future postings.

There is not much to tell about this coin as I don't have much info about it. All I know is that Queen Victoria is probably one of the longest reigning British monarch from 1837 to 1901. So there is a number of coins in the 19th century with her features on it especially that century coincided with the British Empires expansion and the Industrial Revolution. Today I leave you with the scan of the 1897 one cent coin that used to circulate in Brunei too in those years. 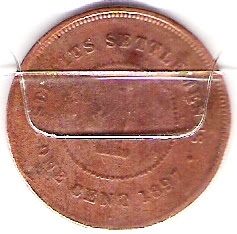 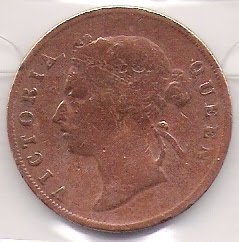