On 27th June 2007, when His Majesty Sultan Hassanal Bolkiah Muizzaddin Waddaulah, Sultan and Yang Di-Pertuan of Brunei Darussalam exchanged the currency note of Brunei with His Excellency Mr Lee Hsien Loong, the Prime Minister of Singapore, the currency note of Singapore - that occassion marked the 40th anniversary of the currency interchangeability agreement between Brunei and Singapore. For 40 years now, citizens of the two countries are able to use each other's currency in both countries. No other countries in the world has such an agreement.

To commemorate the anniversary both the Brunei Currency and Monetary Board and the Monetary Authority of Singapore issued both country's versions of $20 polymer notes sharing a common reverse side. Both countries also issued both circulation and anniversary versions. The anniversary versions are sold in a pair of both Singapore and Brunei notes in a pack sharing a common number as well as added words on the notes stating the 40th Anniversary Currency Interchangeabililty Agreement. On the Singapore note, both countries' crests appeared on the note as well. The two $20 notes are said to make up 40 years anniversary and a total of 12,000 sets were sold. It was reported that the set that contained the no. 1 was auctioned for about $100,000 even though the set was only sold for $88. 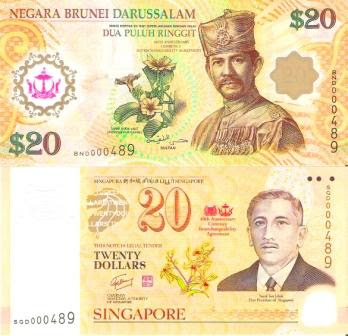 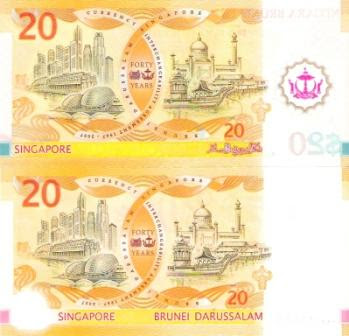