The 20th Southeast Asian Games was held in Brunei in 1999. Brunei had to be arm twisted to host it by the other ASEAN countries. Brunei was asked to host it in a meeting in 1996 and the next year Brunei officially confirmed that it was unable to do so. A couple of months later in the same year of 1997, the SEA Games Federation appealed to Brunei to host the 20th SEA Games as Malaysia had already rejected the offer as they would be hosting the 16th Commonwealth Games.

Brunei agreed on the condition that it hold events that Brunei was capable of doing so and the SEA Games Federation agreed. By October 1997, Brunei made the announcement and at the end of the 19th SEA Games in Jakarta, Brunei accepted the flag and the rest is history.

Am I revealing state secrets by describing the above events? Of course not. This was explained in the brochure that was included in the First Day Cover for the SEA Games. The FDC commemorated the issue of 10 different stamps when it was released on 7th August 1996. It was the biggest FDC in Brunei's postal history. This is the only FDC that I could not fit into the normal FDC albums. The writeups about the games in the brochure to the FDC was interesting and informative. 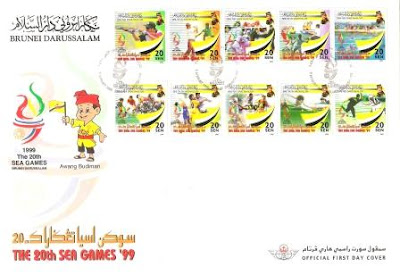 I would like to have all philatelic items of BRUNEI about this stampset such as: mint stamps, FDC, maxicard, sheetlet? Especially, I need the real postal circulated FDCs of BRUNEI with my address via REGISTERED AIR MAIL service.

Can you help me?

I hope your reply soon.