Between 1906 and 1938, anything goes in the Brunei's economy. We were accepting all sorts of currencies issued by the Straits Settlement Government based in Singapore as well as those issued by the Rajah Brooke's of Sarawak and the Governor of the North Borneo Company in Sabah.

Here is one of the currency notes from North Borneo which at that time, its treasury was not in Kota Kinabalu but in Sandakan. 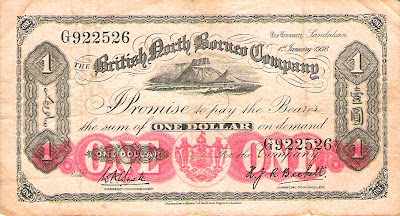