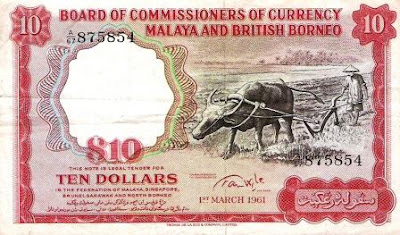 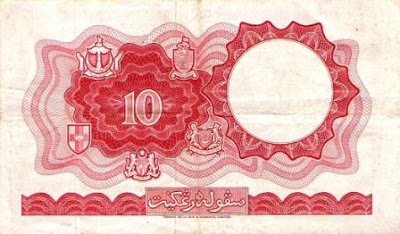 Someone on yesterday.sg website linked to my entry on the $1 duit kapal which I did about a couple of weeks back. I thought as a goodwill gesture, I will reintroduce the $10 note which was commonly used by Brunei, Malaysia and Singapore.

This $10 note was introduced in 1961, 6 years before the breakup of the common currency between the three countries. In those days, Sabah and Sarawak were not yet considered as formal parts of Malaysia. Hence if you look at the back, you will see the crests of Malaya, Singapore, Brunei plus Sabah and Sarawak. This was the last $10 note which were used by all three countries before each began issuing their own in 1967. Note that all three countries, Brunei, Malaysia and Singapore still use the colour red for their $10 notes now.
Posted by Rozan Yunos at 4:37 AM

mind ask the 10dollar bufflo note how much will it worth .thanks