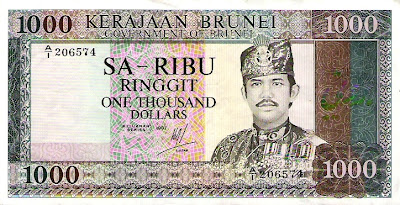 How many people have seen a $1000 note? I guess not many unless you happen to be working in a financial institution or where I am. But then we don't come across that many $1000 notes either.

This particular note was interesting. This lady came in with a bunch of currency notes of various countries and various denominations. Her family used to be a collector but I guess the the current generation are not as interested in being collectors and now want to cash in the collection. It has never been our institution's policy to purchase currency notes from private collectors. I decided to have a personal look and lo and behold! I found this $1000 note which she had and willing to part for substantially more than the face value. Of course notes like this are very rare.

This particular note, now in my album, was the first $1,000 note issued by Brunei. There were two issuance, one in 1979 and the latter in 1987. This note come under the 1972 series and this is the highest denomination of the 1972 series. I showed the $500 note about a few days ago. This and the $500 note are the only two notes to carry this particular portrait of His Majesty's. This is also quite rare as not many people use $500 and $1000 note in those days. This is also one of the largest notes (size wise) in Brunei's collection. It barely fit into my album. The $10,000 of the 1989 series would be the only one to beat this particular note when it come to size. 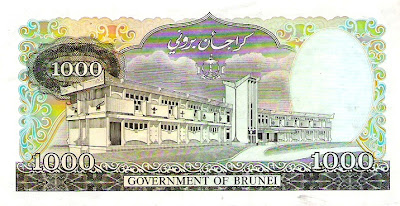 Hi..just wondering how much its value nowadays? If u can enlighten me