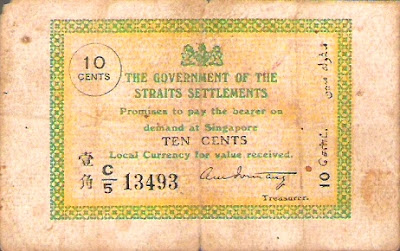 This is the Straits Settlement 1917 10 cent note. This was supposed to be circulated in Brunei under our 1906 Agreement with the British. Whether it actually was distributed is unknown.

I did not realise until I have it in my hand that this is not exactly a paper note. It's more like a cardboard note as the paper is quite thick. This is supposedly an emergency issue during the First World War. During the World Wars, metal was scarce and the British in those days issued currency in paper notes rather than coins. This particular note was also printed in Singapore by the Survey Department. There is another 10 cent note issued during the same years (1917 to 1920) but printed in England. I will do the posting on this other paper note tomorrow.
Posted by Rozan Yunos at 7:13 AM