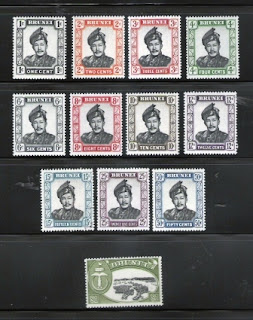 This is Sultan Omar Ali Saifuddien 2nd definitive stamp series issued in 1968. According to the catalogues, there were 3 series of definitive stamps. What's the difference between the three? There's hardly any as the designs are all the same! And that's the crux of the problem.

The 1952 definitive which looked exactly the 1968 had $2 and $5 stamps but everything else looked the same. The only way to tell the difference between them is to take out the watermark reader and looked at the back of the stamps. The 1952 used script CA and the 1964 and 1968 used the block CA. How do you distinguish between 1964 and 1968? Well, technically one used glazed paper and the other used non-glazed paper. Hahaha..... Try to distinguish between the two. Anyway, if there is anybody out there who can tell the foolproof way of telling the difference, do let me know.
Posted by Rozan Yunos at 6:24 AM

Hi Mr. Rozan, I would like to ask you how do I differentiate between the 1964 and 1968 issues. My guess was the lighter center black toning was the glazed paper issues:D