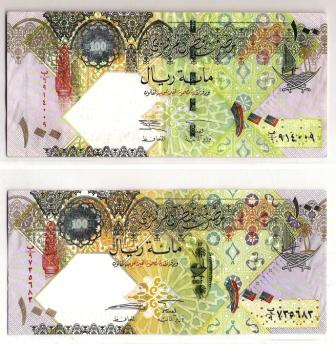 I am back! For those who keeps up with my other blog www.bruneiresources.blogspot.com would have known that I was away for the whole of last week. I did not mention where in that blog but over the next few days, I will feature the country's currency notes as well as the country where I had to do a stop over.

The first notes are Qatar's 100 Riyals. Qatar still maintained an effective fixed exchange rate tied to US dollars at 100 Riyal = USD36. Given the relative weaknesses over the last few months' of the US dollars, Qatar might have to rethink this policy in the future.

Anyway, this 100 Riyal notes come in 2 versions - the regular paper money and the additional polymer series. Surprisingly until 1966, Qatar was using the Indian rupee as currency, in the form of Gulf rupees. When India devalued the rupee in 1966, Qatar, along with the other states using the Gulf rupee, chose to introduce its own currency. Before doing so, Qatar briefly adopted the Saudi riyal, then introduced the Qatar and Dubai riyal. The Saudi riyal was worth 1.065 rupees, whilst the Qatar and Dubai riyal was equal to the rupee prior to its devaluation. Until 1973, Qatar and Dubai jointly issued the riyal. However, following Dubai's entrance into the United Arab Emirates, Qatar began issuing the Qatari riyal separate from Dubai.

I tried to go to the old markets in Doha, Qatar's capital to search for old currency notes. Either I am too late or there is just none available, I couldn't find them. It would have been interesting to find the Qatar and Dubai Riyal or even the Gulf rupees.
Posted by Rozan Yunos at 6:36 AM