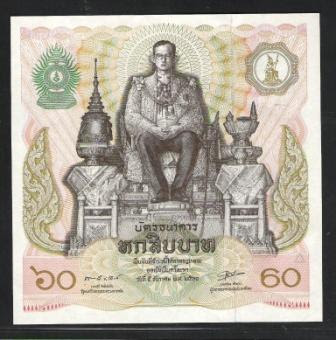 One of the things I did in Qatar was to go round the Old Souk (Old Market). Qatar has only one old market left and they mostly sell Qatari's old trade which was actually fishing and pearls. So you can buy all sorts of fishing and pearl related products. However they do sell other things which included old coins and paper currencies. One trader even sells ancient roman coins. But I was searching for the Doha Dubai Riyal because at one time these now two separate countries issued the same currency. But I couldn't find any at whatever price.

Surprisingly the sellers also sell a number of other currencies as well including this special Thai Baht note which commemorated the 60th year of King Bhumibol Adulyadej of either his birthday or his 60th anniversary on the throne. This is an interesting large square note and obviously could not fit any wallet without it being folded in 4 at least.
Posted by Rozan Yunos at 6:17 AM

Note issued in 1987 (5th of December) for the celebration of King Bhumibol Adulyadej’s 60th birthday and thus the value 60 baht. Last December (5/12/2007) Thailand issued an uncut sheet of 1, 5 and 10 baht to celebrate the King’s 80th birthday. Again this is fairly a large note and the design on the note (reverse) depicting the life of the king from his early childhood days to his wedding day and various royal duties.