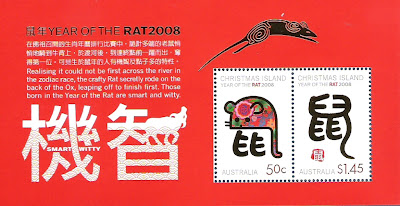 I received this Australian miniature sheet from a fellow numismatist and philatelist in Oz Land. Thanks so much KAI! He was also very nice in sending me an Australian $1 proof coin too - celebrating the APEC which the Australians just hosted last year in 2007.

I was going to wait until the Chinese New Year but I thought that would be too late. Here it is - the Australaian Post celebrating the upcoming Chinese New Year - Year of the Rats or Mouse or some look alike rodents.
Posted by Rozan Yunos at 6:42 AM