Last month was His Majesty's 40th Anniversary of his coronation. I wrote about the stamps that were issued specially to mark the occassion which you can read here.

Together with the set of stamps were two miniature sheets. One contained all the stamps and the other contained a very high valued stamp of $40. At the time of the stamps, the lady at the philatelic unit informed me that the high value miniature sheets were being reprinted. There was a wrong colour or something like that. I did not get mine until today. So here it is: 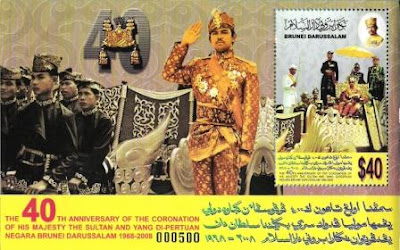 When I went to the counter last month, the lady said she would reserve me a number - the miniature sheet has a serial number. I just said 500 as the number that popped up in my head and I got that 000500. I should have asked for something like 888 or something.

So the lesson would be - get your hands on this $40 miniature sheet. It would rise up in value in the future and this is a pretty good investment.
Posted by Rozan Yunos at 4:38 PM

I got the 40th Coronation Anniversary $40 sheet without serial number.

I also got the $60 sheet without serial number.

Is there 2 version with & without serial number?

Ani one can provide more info ?