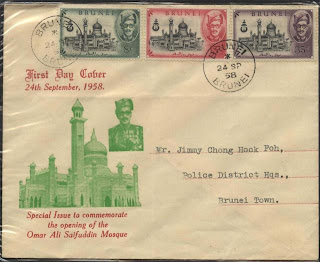 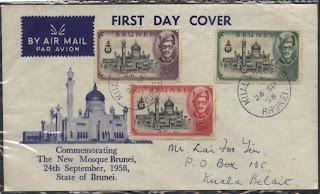 Two of the three FDC had 24th as the postmarked on the FDC. But one of them was issued on 26th, the day after. It would be interesting to know why that is so.
Posted by Rozan Yunos at 7:20 PM

Actually the 3 FDCs of the mosque stamps were issued on 24th September 1958 (see the PO's postmark); only realized that 1st FDC printed 26th Sept 1958 & the other 2 FDCs (2nd & 3rd) printed 24th Sept 1958; which I’m guessing in those day collectors did not check & just issued what they like & having their own designed envelopes. Interesting…..!!!