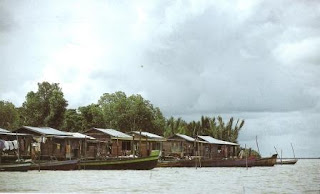 I bought a book about Brunei published around 1980s. The book was relatively modern but it does show a number of changes that Brunei has undergone over the last 20 odd years. I was surprised when I saw the photo above. It shows a Kampong Ayer on Pulau Pepatan. So it is strictly not Kampong Ayer proper. I remembered this scene as I know it appeared on one of Brunei's older currency notes.

And here it is forming the illustration of 1995 series of $5 notes. Most of these series took their photos from one of the postcards or more relatively known photographs. I have written about a few in the past.

For those still wondering which $5 note I am talking about, here it is.
Posted by Rozan Yunos at 6:52 AM

Great work. If you can find out the rest of the series, please let us know. This is interesting.

Pulau Pepatan? I had been there numerous time for fishing...I must had missed these houses remains. But I did saw an Old Fuel Filling station at Pulau Berbunot near Pulan Silamak I think...