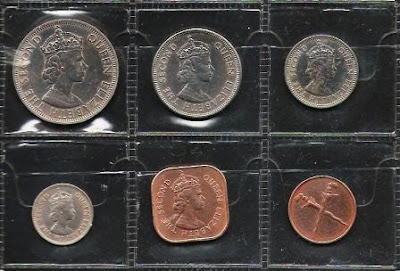 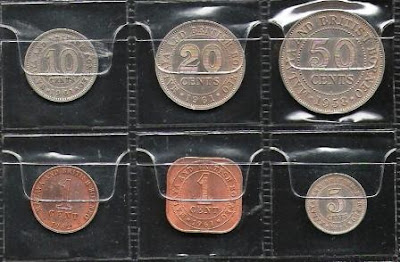 One of the least known facts why Bruneians use British Straits Settlement money (duit Malaya) was that in 1906 when Sultan Hashim agreed to have the British Resident advise him on matters in Brunei was that Sultan Hashim had to demonetise every other form of currency used in Brunei. So only the British from their government centre in Singapore had the authority to issue money not just for their colonies in Malaya but also for Brunei as its protectorate country.

The above coins are the last British coins that we used in Malaya and Brunei. The Queen Elizabeth II coins were issued from 1953 onwards and came in the denomination of 50 cents, 20 cents, 10 cents, 5 cents and 1 cent. The 1 cent carried on the tradition of being square from the previous King Edward VI. In 1962, the Board of Commissioners of Currency for Malaya and British Borneo issued their first and only coin which was to replace the square 1 cent with the round 1 cent and changed the portrait of Queen Elizabeth to that of the kris. These coins lasted until 1967 when all the countries opted to issue their own currencies.

These coins set the size for today's modern Brunei coins. The sizes of these and the present Brunei coins matched exactly. If you still have these British coins, you would have no problem with whatever dispensers coin slots. Though you would be quite mad to do that as the value of these coins have gone past their face values.
Posted by Rozan Yunos at 5:50 AM