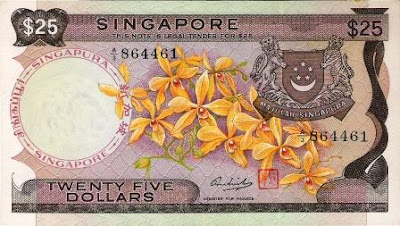 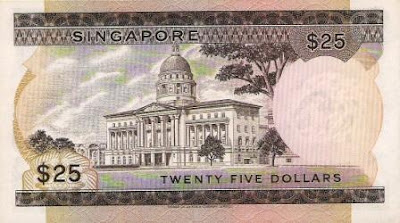 This is my latest Singapore currency note. This was the first and only $25 note that Singapore issued way back in 1967. 1967 is a very significant year for Brunei, Malaysia and Singapore as that was the year all the three countries decided that they do not want to jointly issue one currency but instead all three issued theirs independently.

This $25 note printed by De La Rue in England was designed to be an interim note between $10 and $50 but for some reason was not used as much. The $10 and $50 remained popular. When the Singapore notes was redesigned for the next Bird series in 1976, the $25 note was dropped and the $20 was introduced instead. So this $25, now 40 years old, has acquired a value much higher than the face value.
Posted by Rozan Yunos at 4:51 AM