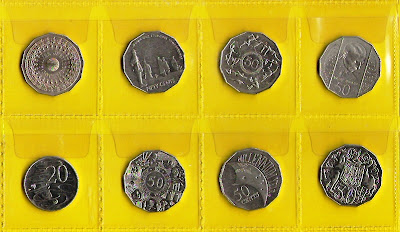 I was in Ozzie land two weeks ago. I spent a week there, other than listening to the policy makers talk about money and the economy, I did manage to get a round of golf in at the Coolum Hyatt Regency, home of the Australia PGA Championship. I thought the course would be tougher but after Jerudong JPCC and Empire's Golf Courses - the one in Oz is tame.

Anyway, I am not here to talk about golf or work. What I realised after a couple of days there, the Australian Government loved to use their coins. Out of the bundle of coins that I amassed were 50 cents coins. At first I thought there was only a couple but apparently most of the 50 cents I collected were special editions. Each coin commemorated something. I only managed to get 7 50cents, that was with the help of our assigned driver and they commemorated the Silver Jubilee, WW2 Remembrance, the Commonwealth Games in Melbourne, someone called Weary Dunlop who did something heroic in WW2, the Milennium, Australia's volunteers and a normal 50 cents. The same thing is also on the 20 cent coins.

If you happen to be in Oz land, take a look at the coins in your pocket or your purse and see history happen in front of you.
Posted by Rozan Yunos at 7:54 PM