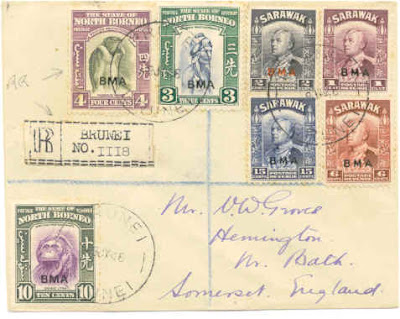 During the Japanese occupation of Brunei, the Japanese used the unused Brunei stamps captured during the occupation and overprinted those with the word Japanese Government. But once the Allied Forces took over Brunei, they could not use Brunei stamps and they decided to use North Borneo (Sabah) and Sarawak stamps and overprinted those stamps with BMA (British Military Administration). The stamps used for Brunei are very difficult to find as you have to find either the Sarawak or North Borneo stamps with the postmark "Brunei" clearly visible on the stamps.

This particular specimen (above) is one example of the BMA usage and the letter was clearly registered in Brunei in 1946. The usage of Sarawak and North Borneo stamps overprinted BMA lasted for slightly more than a year (53 weeks). This particular rare letter has a value of around US$475.00 if anyone wants to buy. You can get it from a rare stamp dealer at www.mayoph.com in Indianapolis, Indiana.
Posted by Rozan Yunos at 6:17 PM

I from Malaysia. I want change with you fdc Brunei and fdc malaysia