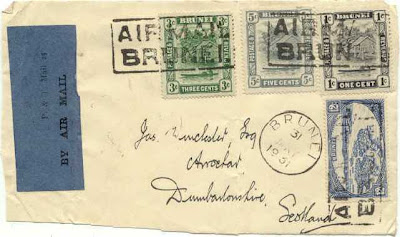 I found someone's entry about this letter which was sent from Brunei to Scotland postdated 31st May 1931. I forgot to ask my postal friends when Brunei started its air mail services but I thought 1931 was a wee bit too early. Remember, planes only started arriving in Brunei late 1920s even then they were mostly seaplanes serving the newly discovered oilfields in Seria. I will just copy that particular entry as follows:

"This bedraggled airmail cover was postmarked with a simple single ring CDS for Brunei. Brunei is a small enclave on the northwest coast of Borneo surrounded by Malaysia.

At first blush, it was thought that this cover most likely would been carried by Netherlands airmail service (KLM). Service between Amsterdam and the Netherlands East Indies had been established in 1927. However, that is not the case.

In 1931, the RAF conducted survey flights around Sarawak, Brunei, Labuan and North Borneo. Three Southampton flying boats, S. 1162, S. 1161 and S. 1128 were used to conduct the surveys. In the second phase of the survey, mail was collected on their return trip from the survey area. The flying boats left their base at Kudat, North Borneo, on June 1, 1931, for Kuala Belait, Brunei, and then on to Miri, Sarawak, arriving the same day.

The flying boats reached Singapore on June 5, 1931. This cover would have been placed on board S. 1162 at Kuala Belait. The boxed AIR MAIL BRUNEI (3 used on this cover) plus the May 31, 1931, CDS were used for this flight. The boxed cancel had also been used for mail carried on an earlier survey flight in April, 1931. It is not known how much mail was collected at Kuala Belait but not many covers have been recorded. On the final leg of the flight from Kuching to Singapore, only about 185 covers were carried.

The cover would almost certainly have been carried by sea from Singapore.
The prevailing air mail service (Karachi-London) was charged 20c plus 6c surface mail and the KLM flight 56c. Unless there had been some superscription to the effect that it was to be carried by air mail for any leg beyond Singapore, plus the requisite additional postage, one can safely assume it was carried by ship. The air mail cancel was used specifically for the RAF flight and not for general air mail.

The destination was Arrochar, in Dumbartonshire County, Scotland. Dumbartonshire is a small (270 sq mi) county on the north side of the Clyde estuary northwest of Glasgow. Arrochar is at the head of Loch Long, a 17-nile long sea loch which has good fishing (when the dredgers keeping the Clyde open don't ruin it with their spoils). Arrochar is about 30 miles northwest of Glasgow.

The airmail etiquette appears to be a government form which is cut from a larger sheet at time of use. It appears to have a form number "P. & T. Mail 25.

I have it on good authority (Jim W-S) that Arrochar is delightful spot; that is also near the foot of Ben Lomond; and also fairly close to the former US nuclear submarine base at Holy Loch; (it's also a short distance from the noted Loch Lomond). When you're in Arrochar, you're in the heart of the action! Which is probably why Jas. Winchester, Esq., had mail from the obscure sultanate of Brunei!"
Posted by Rozan Yunos at 10:36 AM