The following article was published in The Golden Legacy column of The Brunei Times, Brunei's national newspaper on 30th June 2007.

When His Majesty Sultan Haji Hassanal Bolkiah Mu’izzaddin Waddaulah, the Sultan and Yang Di-Pertuan of Brunei Darussalam exchanged the new Brunei’s and Singapore’s $20 currency notes with His Excellency Mr. Lee Hsien Loong, Prime Minister of the Republic of Singapore on 27th June 2007 to celebrate the 40th Anniversary of the Currency Interchangeability Agreement between the two countries’ currencies, that day marked the first time that the Brunei currency shared a similar currency note design with another country in more than 40 years.

On that day, Brunei and the Singapore issued new $20 notes which shared the same reverse (back) design even though the obverse (front) of the two notes are different. The last time the currencies even shared the same design was prior to the 1967 issuance of Brunei’s very own currency notes.

Brunei’s currency had undergone many changes in the past. Historically Brunei’s ancient history, its long lineage of sultanate, its central strategic position in the trade between East Asia and Southeast Asia had meant that many goods and trades took place in Brunei as well as the circulation of many currencies such as those of China, India, the Arabic countries and the likes.

The last Sultan to issue his own coin was Sultan Hashim who issued the ‘star coin’ in 1886 which was minted in Birmingham, England. 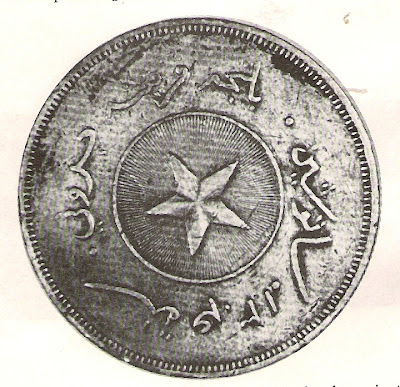 When Sultan Hashim agreed to have the British Resident in Brunei in 1906, he also acquiesced that the other currencies used by the British in the Straits Settlement (Malaya), Singapore, North Borneo (Sabah) and Sarawak to be used in Brunei Darussalam. 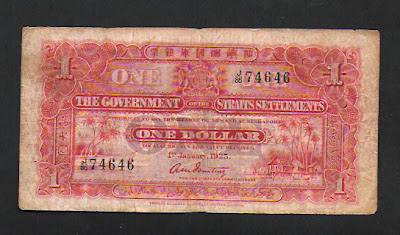 By the beginning of the 20th century, there were a number of these currencies being used in Brunei. The Straits Dollar issued by the Straits Settlement government then included that of Queen Victoria used from 1889 onwards (together with notes issued by Chartered Bank and Hong Kong and Shanghai Bank); King Edward VII; King George V and King George VI.

In 1939, the Board of Commissioners of Currency Malaya was formed and it issued a new currency for circulation in Malaya (as well as in Brunei and Singapore) called the Malayan Dollar. However the currency originally printed in 1940 was short lived with many of the notes captured by German forces at sea and then in 1942, the occupying Japanese Government had issued its own currency notes popularly known as ‘duit pisang’ even though only one of the currency notes ($10) portrayed the picture of the banana tree.

The Malayan Dollar was revived after the end of the Second World War in 1945, the notes (dated 1941) and coins were reissued. One of the more popularly known coins then was the square ½ and 1 cent coin.

The design on the currency notes had the portrait of King George VI and on the back, it had among others the crest of Brunei Darussalam as well as the crests of the various states making up Malaya and Singapore.

In 1953, the Board of Commissioners of Currency, Malaya and North Borneo was constituted. The currency notes featured Queen Elizabeth II and were issued at the same denomination as the King George VI’s issuance. Brunei’s crest was maintained at the back of the note together with other crests.

This new currency note replaced all the other currencies that had been issued by the Straits Settlement, the Sarawak State Government and the North Borneo Government. This new Board is now responsible for issuing new Malaya and British Borneo Dollar to be called officially as the Malayan Dollar meant for use by Malaya, Singapore, Sarawak, British North Borneo and Brunei.

In 1959, the Board discontinued issuing the Malayan Dollar with Queen Elizabeth II on its cover for its $1 notes and later in 1961 the $10 notes.

The new $1 notes had the sailing boat (duit kapal – ship’s money - as some Bruneians called it) and the new $10 notes had a portrait of a farmer plowing with an ox (popularly known as ‘duit kerabau’ – cows’ or ox’s money). The latter can be found for purchase at the Tamu for more than $200 a piece now. 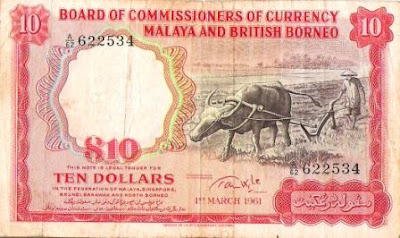 In between those years, the three countries, Brunei, Malaysia and Singapore also signed the Malaya and British Borneo Currency Agreement of 1960.

However the Malaya and British Borneo currency continued as legal tender for a few years at a reduced 85 cents per dollar as the British pound which it was based on was devalued in November 1967.

The three countries also agreed to maintain the exchangeability of their currencies but Malaysia left in 1973 leaving Brunei Darussalam and Singapore to maintain its currency interchangeability agreement until today.
Posted by Rozan Yunos at 11:24 AM